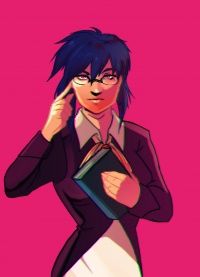 Imagine Motoko Kusanagi as an archivist.

ArchiveBot is an IRC bot designed to automate the archival of smaller websites (e.g. up to a few hundred thousand URLs). You give it a URL to start at, and it grabs all content under that URL, records it in a WARC file, and then uploads that WARC to ArchiveTeam servers for eventual injection into the Internet Archive's Wayback Machine (or other archive sites).

To use ArchiveBot, drop by the IRC channel #archivebot (on hackint). To interact with ArchiveBot, you issue commands by typing them into the channel. Note that you will need channel operator (@) or voice (+) permissions in order to issue archiving jobs; please ask for assistance or leave a message describing the website you want to archive.

The ArchiveBot dashboard publicly shows the sites being currently downloaded. The pipeline monitor station shows the status of deployed instances of crawlers. The viewer assists in browsing and searching archives.

The bot listens for commands in the IRC channel and then reports back status on the IRC channel. You can ask it to archive a whole website or single webpage, check whether the URL has been saved, change the delay time between requests, or add some ignore rules to avoid crawling certain web cruft. This IRC interface is collaborative, meaning anyone with permission can adjust the parameter of jobs. Note that the bot isn't a chat bot so it will ignore you if it doesn't understand a command.

The ArchiveBot dashboard is a web-based front-end displaying the URLs being downloaded by the various web crawls. Each URL line in the dashboard is categorized by its HTTP code into successes, warnings, and errors. It will be highlighted in yellow or red. The dashboard also provides RSS feeds and a list of pending jobs.

The backend contains the database of all jobs and several maintenance tasks such as trimming logs and posting Tweets on Twitter. The backend is the centralized portion of ArchiveBot.

The crawler will download and spider the website into WARC files. The crawler is the distributed portion of ArchiveBot. Volunteers run pipeline nodes connected to the backend. The backend will tell the nodes/pipelines what jobs to run. Once the crawl job has finished, the pipeline reports back to the backend and uploads the WARC files to the staging server. This process is handled by a supervisor script called a pipeline.

The staging server, known as Fortress of Solitude (FOS), is the place where all the WARC files are temporarily uploaded. Once the current batch has been approved, the files will be uploaded to the Internet Archive for consumption by the Wayback Machine.

ArchiveBot's source code can be found at https://github.com/ArchiveTeam/ArchiveBot. Contributions welcomed! Any issues or feature requests may be filed at the issue tracker.

The main server that controls the IRC bot, pipeline manager backend, and web dashboard is operated by yipdw, although a few other ArchiveTeam members were given SSH access in late 2017. The staging server Fortress of Solitude (FOS), where the data sits for final checks before being moved over to the Internet Archive serves, is operated by SketchCow. The pipelines are operated by various volunteers around the world. Each pipeline typically runs two or three web crawl jobs at any given time.

Volunteer to run a Pipeline

As of November 2017, ArchiveBot has again started accepting applications from volunteers who want to set up new pipelines. You'll need to have a machine with:

Note that we currently only accept pipelines from people who have been active on ArchiveTeam for a while.

If you have a suitable server available and would like to volunteer, please review the Pipeline Install instructions. Then contact ArchiveTeam members Asparagirl, astrid, JAA, yipdw, or other ArchiveTeam members hanging out in #archivebot, and we can hook you up, adding your machine to the list of approved pipelines, so that it will start processing incoming ArchiveBot jobs.

As of August 2018, there are a few things you need to be aware of when operating an ArchiveBot pipeline:

Installing the ArchiveBot can be difficult. The Pipeline Install instructions are online, but are tricky.

But there is a Travis.yml automated install script for Travis-cl that is designed to test the ArchiveBot.

Occasionally, we had to ban blocks of IP addresses from the channel. If you think a ban does not apply to you but cannot join the #archivebot channel, please join the main #archiveteam channel instead.

If you are a website operator and you notice ArchiveBot misbehaving, please contact us on #archivebot or #archiveteam on hackint (see top of page for links).

ArchiveBot understands robots.txt (please read the article) but does not match any directives. It uses it for discovering more links such as sitemaps however.

Also, please remember that we are not the Internet Archive.

Usage Caveats a.k.a Things Not To Do With ArchiveBot a.k.a How To Lose Your Voice

Do not do these things (unless otherwise approved by #archivebot channel ops):

Suggested things to focus on archiving with ArchiveBot

Like ArchiveBot? Check out our homepage and other projects!