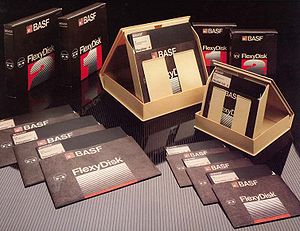 While they were cool-looking, convenient and even somewhat inexpensive after a while, Floppy Disks are out as a medium to store data on home computers. The USB stick, wireless access, the use of the internet, and a whole other range of options have rendered this medium obsolete. That said, a situation now exists where there are millions of these things out in the world, some of them containing rare or unusual pieces of history, and so there's a lot of benefit to getting all that old data off that medium.

This page is meant to be a clearinghouse for various options that a person or group of reasonable technical ability could use to rescue data from floppy disks. If any of these options seem daunting, a number of people have offered to accept floppy disks and pull the data using these tools.

None of these options should be considered endorsements, and Archive Team does not earn commission from the sale of these items.

Some Basic Thoughts on Floppy Disks

There are three different main sizes of floppy disks that had the most traction:

All floppies work on the same principle: a magnetic disc with a hole in the middle is inside a case, and a disk drive reads the magnetic data off the disc. Some aspects changed - where 8" and 5 1/4" discs had no built-in protection for the magnetic face of the disc except a paper cover, the 3 1/2" versions had a small spring-loaded door that was opened by the disk drive.

Storage could make a huge difference in the lifespan of Floppies, and a pile of disks put inside a box that was stored in a low humidity, non-extreme-temperature environment could last a lot longer than a floppy used constantly that was left on top of a computer monitor for weeks.

We're going to assume you're just trying to take a pile of disks from however far back and transfer the data onto something more recent. In all cases, try and avoid throwing out the original disks after doing transfer, as you might find that the transfer you've done is missing information, or that technology might have shifted in the meantime, allowing better extraction of the data.

Spend enough time with floppy disk nerds, and eventually you will hear weeping about the "Flippy Disk" situation. We'll use the FC5025 description of the issue here:

Many older computers recorded on only one side of the disk. So, people would fill one side of the disk and then flip it over to store more on the other side. Disks used this way are called "flippy" disks. 5.25" disks have a hole, called the index hole, that lets the drive know if the disk is rotating. (The index hole has other purposes also.) The problem with flippy disks is that when the disk is inserted upside-down, the drive cannot see the index hole. Many drives won't read from the disk unless they can see the index hole. If you have one of these drives, the FC5025 will be able to read from the first side of the disk only. When you flip the disk over to read the other side, the drive will not send any data to the FC5025, and the FC5025 will not be able to read that side. Please note: even the recommended TEAC FD-55GFR drive cannot read both sides of flippy disks. There is no recommended drive for reading flippy disks at this time. 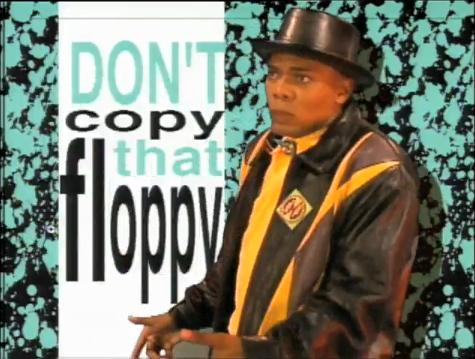 What you're doing, here in the future, is just what the software companies of years past were terrified you would be trying to do: make multiple, potentially unlimited copies of the software on a floppy disk they sold you. To this extent, many companies selling software would enact one of many protection schemes to prevent duplication.

Some would use the documentation or included items in the package and have the software query the user to verify they paid. Some used hardware dongles (although generally this was high-end software, not, say, a game). And yet others implemented copy protection into the disks themselves.

An example of this might be spiral tracking, where a computer would start up off the boot sector of the disk, but then the booted "OS" (really just a control program) would force the drive head to act counter-intuitive to what any regular floppy would be expected to present. For example, a spiral. This meant that a standard disk-copy program would duplicate the drive as if it had regular tracks, but would totally fail on it, and the software was protected. And also un-preserved.

This means that software being run now to duplicate a floppy disk is one good at doing a magnetic copy, since all the other rules are out the window. It means that in cases where a drive shows lots of errors copying a disk, it might not be a bad disk, just the copy protection kicking in decades after it was dreamed up. It's a problem to keep in mind.

There are currently multiple ways to transfer a lot of floppy disks, some involving original hardware and others involving customized circuits to use modern hardware to pull the data off the disk.

The DiscFerret is a USB device that reads magnetic flux data from disks at a sample rate of up to 100MHz. It has an interface port that can be connected to most common floppy drives, as well as MFM and RLL hard drives. This allows capture of all data, including copy protection, unusual formats, and mastering data. Though the hardware is quite powerful, the software is under heavy development at this time. A complete floppy format analyzer program is in development. All components of the board (including the hardware, firmware, and software) are under an open source license, with source code and hardware designs available at the DiscFerret Mercurial repositories. There is also a support and development IRC channel, #discferret on Freenode. At this time the boards are not available for purchase, and the hardware side of the project has been largely discontinued.

The SuperCardPro is a USB magnetic flux reading device based around a 160Mhz PIC24HJ256GP210A microcontroller along with 512K of SRAM. As a generic flux reading device, it can handle reading raw flux data (synchronized by index marks) at most common rates. It connects to any mini-shugart (34-pin) interface floppy drive (3.5" or 5.25"), or an 8" drive with the 'wide-shugart' interface, if an appropriate adapter is used. The software allows sector-level copying and decoding of the flux data, as well as raw storage of the flux data.

The AppleSauce FDC is a USB flux reading tool based around a Teensy 3.1 microcontroller development board. The AppleSauce device is used to power and control an original Apple Disk][ 5.25 drive, to image Apple][ diskettes at the flux level. It is capable of reading all quarter tracks up to track 36 or 37 on an Apple][ formatted 5.25" disk in about 3-5 minutes, depending on what tracks are used. With an added (included) index sensor, it is capable of correctly imaging the vast majority of Apple][ software diskettes, whether or not they employ copy protection. It can also do very fast (<1 minute) imaging of unprotected Apple][ diskettes. Support for the 3.5" Apple 800k (and 1.44MB) external drives is planned for the very near future (as of Nov 2018).

Another choice is a USB device called the KryoFlux connected to a modern floppy drive (3.5" or 5.25"). This hardware solution utilizes a floppy head to read a floppy disk not as a bunch of data but the actual magnetic flux of the disks themselves. What this translates to, in the vast majority of cases, is a disk image that includes any copy protection, unusual write schemes, or trickery. Naturally it captures the full data of the disk as well, and this is likely overkill if you're digitizing a personal set of files, but it's good to know the option is there. Kryoflux boards are for sale at the Kryoflux site. Please note that the Kryoflux software license may cause legal issues if the resulting images are not intended solely for personal use, or the Kryoflux is intended to be used in any commercial or preservation/museum capacity. The license has(in Mar 2012) an anti-compete clause in it, preventing the user from using any competing disk-imaging product.

The Individual Computers Catweasel is a PCI card that allows connecting a floppy drive. Just as the DiscFerret and the KryoFlux, it reads disks at the magnetic transition level. It also has SID sockets and Amiga peripheral ports, but the quality and performance of these is disputed and the use is limited. As of 2012, the CatWeasel MK4plus appears to be unavailable for purchase. The official CatWeasel software was last updated in 2009.

A slightly less expensive and more directed version is the FC-5025, from Device Side Data. The FC5025 is a controller board exclusively for use with 5.25" floppy drives. Also consisting of a circuit board with USB and floppy drive connectors, this hardware can read a certain number of disks as well, although there are some disk variations it can't.

If you're looking to duplicate just disks for the Commodore 64, the ZoomFloppy from RETRO Innovations will allow you to do so with an original 1541 (and compatibles), 1571 or 1581 disk drive, and plug it via this card into your Windows, Unix, or Mac OSX system. As an extra bonus, it'll allow you to hook up commodore printers to your modern machine, just in case you were looking for that.

There are also the older X1541 series cables but these require a built-in parallel port which most PCs are no longer equipped with.

The SIO2PC allows your Atari 800, 130XE, etc to see a PC as another floppy disk drive, making it easy to copy floppies to it, as well as providing a handy way to run your Atari without using a floppy drive. They can be bought various places like AtariMax or you can build your own from the original schematics.

RetroFloppy makes cables allowing an Apple II or III to be hooked up to a modern PC, at which point disks can be copied using the open-source ADTPro software. This method does not support copy-protected disks, however.

The FDADAP is a small adapter that allows connecting a 50-pin 8" floppy drive directly to a standard floppy port. It takes care of the different pinout as well at the TG43 signal, which is needed for writing 8" disks. It has a convenient indicator which shows the current head location.

Disk2FDI is a shareware utility running under DOS to create Formatted Disk Image (FDI) files from actual floppy disks. It reads the following disks to standard sector-dumped disk image files: Amiga (".ADF") Apple disk ][ (".DO") Atari ST (".ST") Commodore 1541 (".D64") PC (".IMG") single-density (".DSK") Please note that to read any of the above disks, except Atari ST and PC disks, you will need 2 floppy disk drives. (The Disk2FDI comes with a modified cable if you order the deluxe version, so it's listed under Hardware.)

There are many programs for modern operating systems that can read and write to floppy disks through original hardware.

Raread and Rawrite are complementary programs that allow the read and write of pre-formatted 3.5 inch floppy disks. These utilities were built for DOS systems, with clones written that run on OS/2, NT, and Win32.

For a comprehensive list of floppy disk imaging programs, see this page (FreeDOS).

If you're interested in volunteering to transfer disks for people, please put your information here. Note that this same page has been mirrored to here on the Digitize Wiki as well, and people are also actively putting their names in there, so check both places.