Difference between revisions of "Yahoo! Groups"

Yahoo! Groups is Yahoo's email service; it's the result of the acquisition of eGroups and some other Yahoo! stuff.

It's been stable for a long time (since the late 90s), long enough for some specialised software to be developed to do backups of it. (Not many other websites can say that.)

The yahoo-groups-backup is a Python script which allows a scraping of the group. So far only messages are scraped. It puts all the info and metadata (both rendered message body and raw email) into a Mongo database, and provides a script to dump a static version of the site that can be read off of the filesystem. It works with Neo and with private groups by clunkily using Selenium to do the scraping.

Update: Apparently since Yahoo! Groups changed to the neo interface the script no longer functions and is no longer actively maintained.

The Yahoo Group Archiver is a Perl script which allows an export of "the messages (without the attachments), everything from the files section and all the images from the photo section along with their hierarchy on Yahoo".

It appears that, if you get the "Couldn't get message count" error when trying to use it, the solution is to edit the yahoo2maildir.pl file and replace the bottom line my $url = $HTTP::URI_CLASS->new($redirect, $base)->abs($base); (under the heading sub GetJSRedirect) with my $url = "http://groups.yahoo.com/group/$group/messages/$begin_msgid";

More frustratingly, it appears that Yahoo blocks your IP temporarily after hitting some invisible limit of data downloaded (the Archiver will continue to "download" messages for a bit, ending up with a bunch of 0-byte files, then stop completely). It's unknown if there is a solution.

Also: sometimes, some of the downloaded messages, in the middle of an otherwise normal batch, are 0 in size - almost as if Yahoo blocked your IP for a few seconds, then stopped. Watch out for these so that you can re-download them later.

There’s a convenient JSON API. May require logging in and joining a group to use all endpoints:

Note that all paginated responses are limited to the first 500 results and do not return anything new beyond that.

The following graphs are slightly outdated: 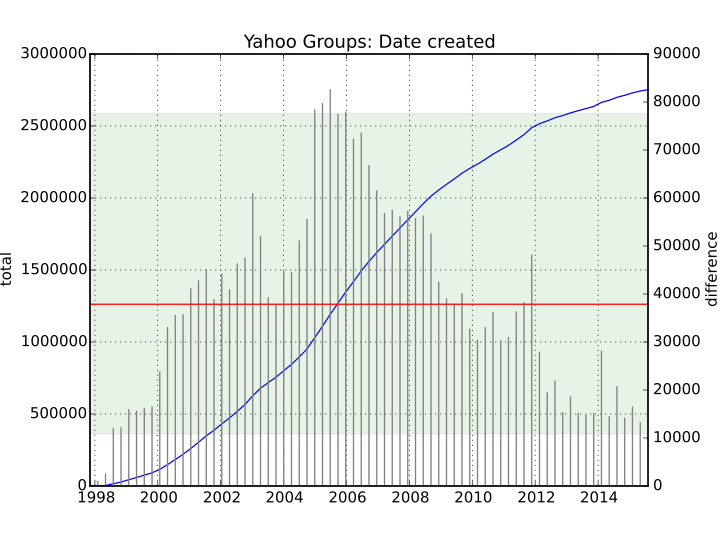 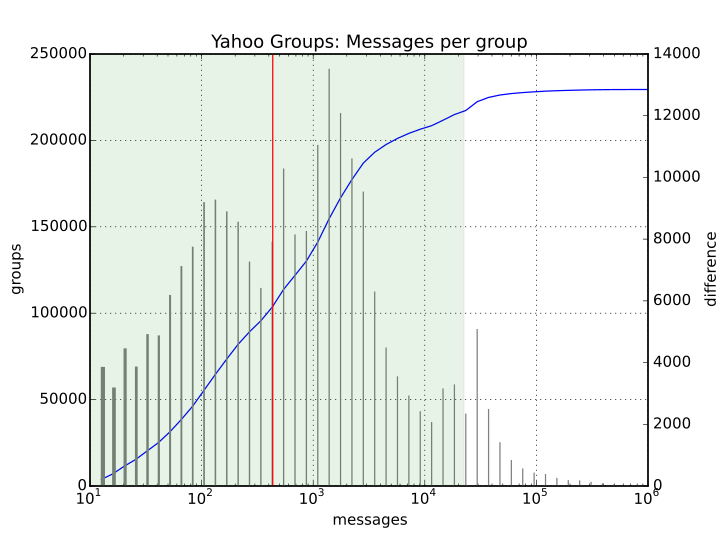 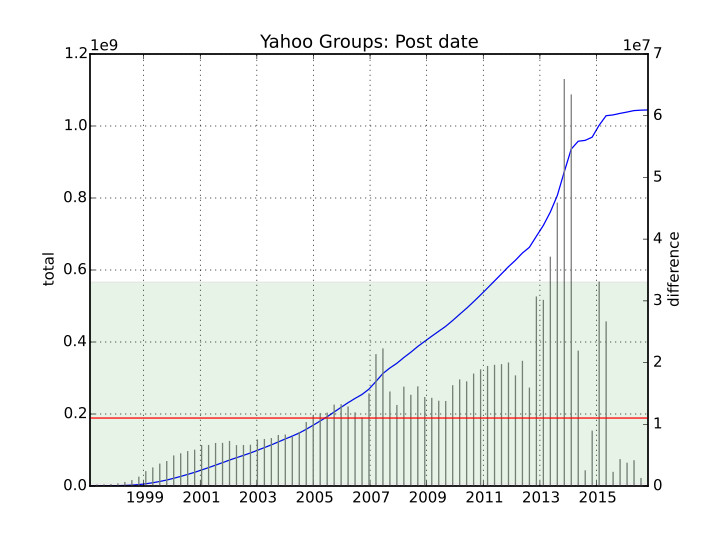