Snapjoy was a photo hosting and sharing service founded in May 2011. It was acquired by Dropbox in December 2012 and murdered in 2013.

We’re excited to announce that Snapjoy is joining Dropbox!
We built Snapjoy because we wanted a better experience to enjoy our own photos -- we love the product and use it every day. The support we’ve received from people around the world is humbling.
As a fellow Y Combinator company, we’ve always admired Dropbox and loved their product. From the moment we met the founders, it was clear we shared a common goal. By combining forces with their amazing team, we can leverage the technology and scale of their platform and focus on what matters -- delivering an incredible photo experience to over 100 million people.
So what happens next? First and foremost, don’t worry -- your photos are safe! Though we won’t be accepting new signups, existing users can continue to use Snapjoy to share and enjoy photos just as you do now. We’ll be in touch with more information over the coming weeks.
We'd like to thank everyone who trusted us and helped make Snapjoy what it is today. Stay tuned, the best is yet to come.
-- Michael and JP

After two years of building Snapjoy, the time has come for us to shut down the service. It's been a journey unlike anything we'd imagined, and we can't thank you enough for your support and input along the way.
As of today, June 22nd, no more photos can be imported into Snapjoy and the Snapjoy iPhone app will no longer be available. Your photos will be available to download until July 24th from the website. After July 24th, all photos and data will be permanently deleted.
To download your photos, follow the steps below:
Thank you,
The Snapjoy team

Username exploration, and archiving in general, had a few problems:

Nonetheless, with some assorted tricks, we put together a list of usernames with the following tricks: 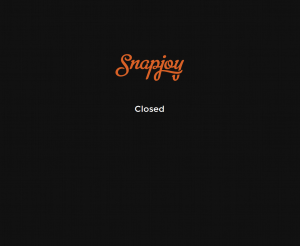 In the end, because of the very small number of users we found, and that many (maybe most) either had no stuff or had no public stuff (and we had no way of telling the difference between the two). we ended up saving about 5.3 gigabytes of photographs. We don't know if that means vast amounts of data has been lost, or if Snapjoy was just really really small (and that Dropbox was too cheap to pay the $5/month to continue hosting it). Here's what we got:

Stuff we found out while exploring the site, kept here for historical reasons: