Blip.tv, or now Blip, is a video hosting website for original web series. Video creators, or producers, can apply for an application for their content to be monetized. Blip.tv retains a portion of the advertising revenue.

blip.tv is a free videoblogging, podcasting and video sharing service.

Our goal is to change the world by bringing excellent free video publishing services to people who are unable or unwilling to get outlets from major media organizations in the United States and throughout the world. Our passion is democratization. Our principles are the rules we live by.[1]

If you don't have a blog we'll give you one, and if you have one already we'll make it a video blog.[2]

On May 28th, 2014, Blip sent out an email to account holders informing them that video uploads will be disabled after July 7th 2014, and their accounts will be deleted on September 1st 2014. 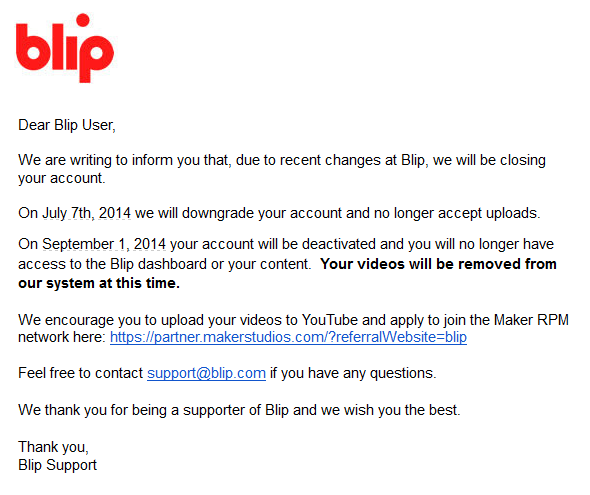 Blip.tv, the video sharing site that was created by a team lead by Mike Hudack and Dina Kaplan, is dead. It’s now called “the old Blip.tv” and has been replaced by something owned by that horrible video-channel eating company network Maker Studios. (Mike and Dina left Blip in 2012.)

Almost when people thought the site could survive yet another "shutdown", Disney (through Maker Studios) is finally going to be landing the killing blow on August 20th.

How can I help?

You can run the ArchiveTeam Warrior! Check out that page for more info about running it. (Alternatively, you can run the scripts manually.)

How big are the files?

File sizes range from 5 MB to 2 GB. If you have slow upload speeds, you can still help. A small contribution still helps along the way! Still not convinced? Then help us spread the news and get others to help.

I'm running the warrior but it just says "Starting WgetDownload"

It currently does not show your download progress, but don't worry, it is actually downloading. You can check by looking at the bandwidth graph in the lower left corner of the page.

Here are all the video urls for blip.tv from the sitemap files, sorted and de-duplicated. Total count 228,133. https://archive.org/details/2013_10_09_bliptv_urls

A searchable index for links to Blip.tv videos on Archive.org can be found here[IA•Wcite•.today•MemWeb].

A logistical snafu occurred and the project slipped through the cracks. (Only one project leader existed and this leader disappeared.) Only 7TB of 70TB was saved. These videos were added to the existing bliptv collection.

The second round of archive are located in archiveteam_blip collection.